On 7th June, Coldfall took part in the Phoenix Outdoor Centre’s 8th Annual Bell Boat Regatta on the Welsh Harp Reservoir. It was first time Coldfall had been invited and the first time any of our children had set foot in a bell boat. The day was wet and windy and the competition tough, but Coldfall won, beating the only secondary school taking part by one second.

Coldfall girl’s football team are the Haringey Premier  League champions. After an impressive and record breaking 16 game unbeaten streak Coldfall were crowned champions. This followed a final round of a 1 nil and two 3 nil wins.

On Friday 14th June Coldfall took part in the year 4 Highgate Cricket club championship against 7 other schools in Haringey. After a closely fought group stage that included Channing private school, Coldfall came out on top. This set up a final against the other group winners North Haringey. After a slow start Coldfall found their feet eventually winning comfortably.

On Thursday Coldfall took part in the Haringey Gymnastics Championships for a  place in the London Youth Games. Coldfall entered both age groups year 3/4 and Year 5/6. The teams were selected after lengthy trials to make sure the best performers were selected. In the year 3 and 4 competition Coldfall finished second to Coleridge by 0.7 of a point. However Nicolas from Puffin class won best male gymnast for his age group and Liana from Puffin class came 3rd in her age group.

In the afternoon the year 5 and 6 team took part. The team was made up of Ava, Bodie, Ben and Josh from Year 6, along with Evelyn, Dominic and Melissa from year 5. After some of the best individual performances we have seen, across all 3 disciplines: the vault, body management and floor exercise. Coldfall won the competition beating Rhodes Avenue and Coleridge into 2nd and 3rd respectively. We also had individual medals with Ben finishing 3rd as well as Evie and Josh finishing 2nd in their age groups. This means Coldfall will go forward to Represent Haringey at the London Youth Games in July for the 3rd different sport this year. 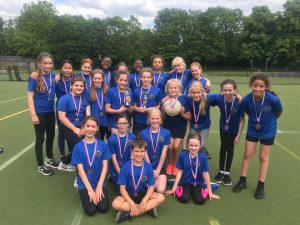 Sam qualified for last weekend U10-U13 Table Tennis National Championships. This year Sam qualified to play in the U11, U12 and U13 events.

In the U11 he managed to repeat last year’s success by winning a bronze medal in the higher age category.

We all lead busy lives don’t we? I bet you’re frantically running around trying to organise things for the festive season, be a great parent, friend and partner whilst desperately trying to find an opportunity for a run or the chance to play your guitar (very averagely) for a bit aren’t you?