Here are some links to organisations that offer music programmes for children and families.

Coldfall Teaching School offers bespoke support packages to schools who are looking to improve their music provision.  This can include:

Established in 2017 this network of experienced teachers, music education experts and representatives from music hubs and arts organisations meets throughout the year to support and enhance music provision within our own and other schools. The network has the following objectives:

“Music is a moral law. It gives soul to the universe, wings to the mind, and life to everything” (Plato)

At Coldfall we believe that all children should be inspired by music and that every student has the right to an outstanding music education.

We aim for children to develop a love of music, developing intrinsic musical skill, knowledge and understanding. We are also passionate about the power of music and the impact it can have on a person’s emotional, social, personal development and well-being.

We have an exceptional school choir formed of pupils from year 5 and 6 who perform regularly in the local area and further field. The choir rehearse weekly after school under the direction of Kate Vetch and Rob Bean and sing a wide range of music in 3 and 4-part harmony. Recent performances include the London premier of Rio Amazonas with Roland Perrin and his Blue Planet Orchestra and Carmina Burana at the Queen Elizabeth Hall under the baton of David Temple (OBE). The choir were also invited to perform at the Music for Youth National Festival at Symphony Hall, Birmingham. Other highlights include; The Wigmore Hall, The Royal Albert Hall, The Union Chapel and Alexandra Palace. In spring 2020 the choir will record and perform Benjamin Britten’s Saint Nicholas with The BBC Concert Orchestra and Crouch End Festival Chorus. They also recently performed the children’s choir part in the world premier of One Giant Leap by James McCarthy with The London Orchestra da Camera and Hertfordshire Chorus at The Queen Elizabeth Hall.

The guitar orchestra consists of 20 pupils who rehearse weekly under the direction of Michael Antoniou. The group was established in January 2019 and perform a wide range of repertoire.

We have a newly established school orchestra for pupils in year 5 and 6 who have regular lessons in orchestral instruments. The orchestra rehearses on Friday lunch time under the direction of Kate Vetch with assistance from Caroline Gardiner. Children in the orchestra also participate in weekly sectional rehearsals with specialist teachers; Josef Stout and Chris Snead.

Coldfall Youth Voices is a new choir for secondary aged pupils from North London. Entrance to the choir is through audition and they rehearse from 5-6pm on Monday evenings during term time under the direction of Kate Vetch and Nina De Sausmarez. For further information please visit www.coldfallyouthvoices.co.uk

All children in the school receive weekly music lessons with a specialist teacher. Our curriculum aims to give children the opportunity to develop performance, composition and listening skills through exploring a variety of musical styles, traditions and genres and by taking part in a wide range of activities including; African Drumming, Music Technology, Samba, and whole class instrumental tuition in recorder and ukulele. Children also learn to read staff notation and explore classical music through creative projects.

Coldfall is a “Platinum Singing School” and singing is embedded into our daily routine, through singing assemblies, staff singing and our choirs. We also use singing across the school to enhance learning in all curriculum areas.

Over 300 of our talented children learn an instrument through school, and even more have private lessons. Lessons in violin, piano and guitar are available through Haringey Music Education Hub. We also offer tuition in flute, saxophone, clarinet and trumpet as part of our Wind Instrumental Programme.

In March Coldfall School Choir recorded the children’s choir part in St. Nicholas by Benjamin Britten with the Crouch End Festival Chorus and The BBC Concert Orchestra under the baton of David Temple. Four Year 6 Coldfall pupils were also selected to sing the parts of The Boy Nicholas and the Three Pickled Boys. The recording will be released on Signos Records later this year.

In February our groovy year 6 pupils competed against each other to be crowned Coldfall Samba Champions 2020. The mighty Wren class were crowned winners thanks to their lively moves, wild costumes and rhythmic expertise. Mr. ‘Percussion’ Plato described the performers as ‘Samba Animals.’

Our school choir performed in the world premier of One Giant Leap by James McCarthy. Conducted by David Temple and accompanied by The London Orchestra da Camera our fabulous singers joined Hertfordshire Chorus on stage at The Queen Elizabeth Hall to perform this exciting and inspiring piece that was composed to celebrate the 50th Anniversary of the first moon landing.

Click here to watch some short segments of our rehearsal

In March all of year 5 worked with professional opera singers Laura Woods and Alistair Sutherland who regularly work with opera companies such as Opera Holland Park and English National Opera on a week-long opera project. They learnt to sing and act as an operatic chorus, staged scenes and even did stage combat which resulted in them performing a truly unique version of Bizet’s Carmen. 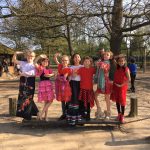 Our annual Christmas concert was attended by over 750 audience members over two nights. Every child in year 5 and 6 performed, as well as performances by the school orchestra, Coldfall School Choir, Coldfall Youth Voices and our staff choir. In total we raised nearly £5000. Thank you to everyone who contributed to the event to make it an enormous success.

No Day But Today

When We Were Young